Not a picture of which I’m fond

Then, it set its sights on us here in the Lowcountry

A week ago, we watched where Dorian would be headed

Hope that they would not

I checked to see if the Southpark Marriott had availability

As we gathered with friends over Labor Day weekend to watch football, have a cold end-of summer beverage, and lament the re-start of the school year, His Excellency Henry McMaster, Governor of the Great State of South Carolina, came on the news to announce that mandatory evacuations of all coastal counties would begin at noon on Labor Day

There goes the weekend

Immediately, I made that hotel reservation in Charlotte

I sent another text to our myriad Charlotte pals

Immediate response from one of them, “Good! You’re coming for supper. :)”

Some down the street neighbors were over at the time

We all had to scatter as there were hotel rooms to book, calls to make to family, limbs to remove, furniture to bring inside

From Sunday at 6 p.m., all of us were on heightened alert

The next day, being Labor Day, made for a less than relaxing end of summer

“Yes, ma’am, to Charlotte, if we go anywhere”

Had it just been me to consider, I would have stayed home

But, with two teenagers and a dog, if the power goes out and there’s nothing to do and no one is home, then, it makes for a long slog

We went to the store

We went to King Street

We made supper reservations with pals

We talked to friends

I was the only one there

We went to supper, pre-storm, at a local Italian joint, which was proud to tell everyone it was STILL open in spite of the mandatory evacuation

“We have a limited amount of Parmesan”

Damn, if this storm isn’t taking an early toll

Tuesday was an even longer day

We turned over the portable basketball goal

We secured as best we could

We moved cars to higher ground

The updated forecast was for 10.3 foot tide with 10-15 inches of rain. That would have caused Hugo style flooding, the worst

A pal who works for CNN sent me a message advising he was heading our way. Not cool. The only thing worse would have been for Jim Cantore to be coming this way, too

All day there were updates and comments

We made the decision to leave on Wednesday morning

Our children were spending the night out, going out with friends, getting together with pals to combat boredom

We checked in on each other

Charleston goes back to being a community instead of a commodity

“Does the Pope wear a funny hat?”

The Blind Tiger, in existence since 1893, becomes re-populated with local types, even kids from off like me.

We went there on Tuesday at 4:30 p.m. with some other local folks. As we were leaving around 6:00, more of we people began to show up, ages 21 to 81. Really. Some wonderful older folks were coming to the watering hole to commiserate over the latest updates

“Oh, I nevah leave unless it’s a Cat Fo”

“Hell yes I’m leaving. I ain’t sittin round the hewse with my wife and chirren all week”

From there to the house of friends in the ‘hood

A farewell drink or two or three

Always a good plan to roast a chicken, storm or no storm

As we returned home that night, we confirmed that we have the nicest friends

Friends here, there, and everywhere

We won the friendship lottery

We packed the car

In 1999, when we evacuated for Floyd, we took silver and artwork with us

This trip, we took bourbon and vodka with us

On Wednesday morning, we went through the first couple of outer bands with dumping rain. Tide was low, but winds were already whipping

Fifth year in a row with named storms hitting us

It never gets any easier. See, e.g., Tenuous, supra

We left for the Queen’s City around 9:30 and pulled into the Shake Shack at the Park Road Shopping Center at 1:00 p.m.

Wish we had a Shake Shack in Charleston

Text to our hostess for supper

To the hotel we went, where they could not have been nicer about waiving the 48 hour cancellation policy and the pet deposit

It’s always good to be in the Old North State where this lady greets us in every elevator: 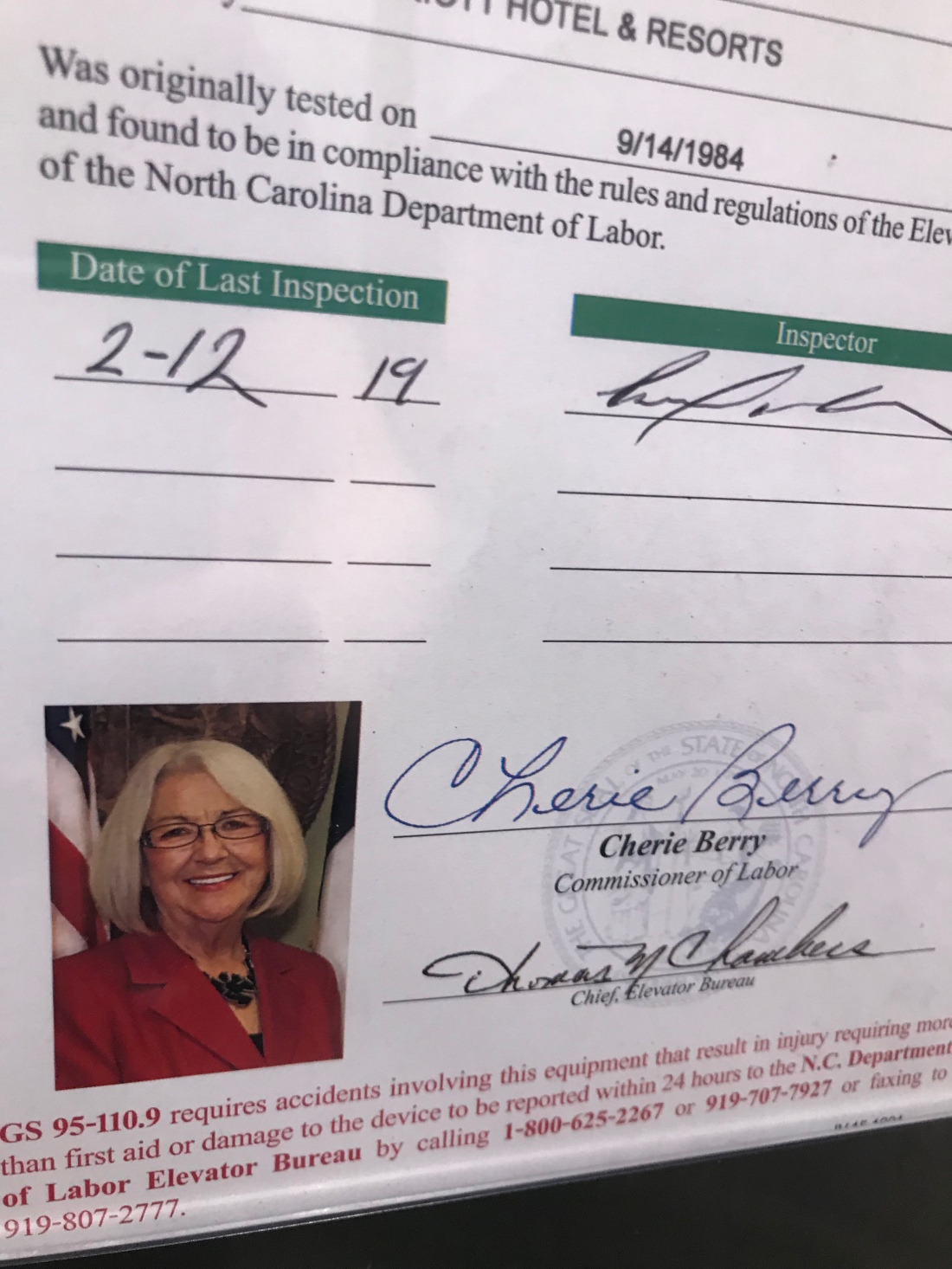 We took our pooch for a long walk, then, it was off to Capitol

If you’re ever in Charlotte, go by

You don’t have to buy a thing, but it’s so pretty and the ladies who work there are lovely

It does help when the owners are pals

It also helps when the same owners happen to be at their house preparing our evening repast. It was they who stated we would be coming for supper days before the storm

As I chatted with one of the lovely ladies who works there, I heard, “Is that Hamlin O’Kelley’s voice I hear?”

I have to apologize to our Capitol pals, as, usually, I am more of a conversationalist

After a couple of hours at Capitol, a few purchases, an alteration appointment, and a great time, it was time to leave that high touch experience and go to….Southpark

Yes, I call it LuLu Lemon’s

All the usual mall rats

As we walked through that dying shopping medium, our eldest looked at me and said, “It’s hard to go from that immersive experience to …well…this…” as she swept her arm left to right in a gesture reminiscent of Loretta Young entering a room

We looked at everything

We walked a billion steps

We said we would be back the next day

We drove to Whole Foods for some snacks

From there, it was back to the room for another walk of the dog

After refreshing, it was time to head to supper where our host and hostess and their daughter welcomed us as only they can do

Thirty plus years of friendship really does help

I highly recommend it

Golden nuggets such as

“I told one of my friends that I was going to Capitol. She said, ‘All they have there are statement pieces’. I told my friend, ‘What do you know? You only wear shorts and t-shirts.’ Really, I said that to her.”

High fives on that one

“[So and So] says it’s the most soulless place on earth.”

“Lizzo? You like Lizzo? Oh, yeh, that makes since, you love Posty.”

“It was $94 worth of salmon. I had to check the balance in our account before I bought it”

“Do you give everyone from Charleston that accent, Hamlin?”

“You know I don’t let anyone help in the kitchen”

“I think these are a little frost bitten, but I think you’ll love them”

“How about a little brown?”

“You know, we entertain the same way”

Literally, there is only one person I bro-hug, and he happened to be our host that night

On such evenings, usually I’m the one to keep the wine flowing, but not on a school night with potential Cat 3 about to strike the Lowcountry

We reluctantly said our goodbyes and bid each other adieu

Walk down to Co-Cola office with said canine

No one is up that early in that part of Charlotte

Not even the paper delivery man

At least it was cool

Back to the hotel and a couple more hours of sleep

Then, I drove to the Starbucks at the Taj-Mah-Teeter on Colony Road

So many wonderful conversations overheard

“Y’all know the [So-and-so’s]? They have a house at Deb-ah-doo and it’s probably going to be destroyed!”

“[So-and-so] just came home from [The College of] Charleston”

“Well, if he’s at [The College of] Charleston, then he’s gonna come back at Christmas wearing Redwing cowboy boots, kahki’s, Johnnie O’s”

While we got ready, I checked the radar all morning, especially right before we went to breakfast We drove over to The Little Spoon on Selwyn for breakfast

Pretty good in spite of its hipness

The two men behind our table were discussing their respective houses at “the Beach”. As though there were only one beach. One had a house at Kiawah. One at DeBordieu.

Little Spoon satisfied everyone, especially with that big bowl of coffee

When I was growing up, no one would have named anything “little spoon” due to a specific connotation.

I’m not talking demitasse, either

From there, it was over to Tabor, Capitol’s brother store

A few purchases for Dad, an hour of great conversation with the folks who work there

What are the chances?

One accoutrement at a time

We hated to leave those folks, too

Did Sir Edwin Lutyens’ Ghost design all of these renovations?

I think this architecture has had its moment

But, may be not

Then, it’s back to Southpark, and over to the Container Store

“I think we definitely need that,” I say pointing to something

In response I get a wide eyed look of shock

“We got to get out of here, Dad. This place is dangerous for us,” said the youngest child

From there, we took our eldest to meet a friend so that they could be found at fine stores everywhere all over Charlotte

“There goes that crappy water oak”

The worst trees ever

Back to South Blvd. area that is up and coming

There goes the neighborhood

Wherever Warby Parker establishes a beachhead, other stores will follow and the funk will depart

We decide on lunch at Superica, Tex-Mex goodness

It being the South, we run into a lovely lady whom we know and her children who have evacuated from the coast, too

One of the best

She has cousins in Beaufort

“LOVE this so much, seeing y’all”

“They let anyone in this place, even kids from Beaufort, SC”

And that cold unit

We then go and have an extended rest period

They recommend another store

More of an extended rest period

And, then, this guy. He lost the hurricane for sure

“Not too many trees down”

“Your house is fine”

Off to supper at Bar Marcel

So many Charlotte Moms there

Storm has already moved on

Thought about driving after supper

Up early the next day

The Governor had not lifted the evacuation order, but we’re fighters

We fly down the road as fast as we can

Only a little bit messy around Orangeburg, SC

Everything is a litte messy in and around Orangeburg, SC

Obviously, we weren’t the only ones to leave Asheville, Greenville, Flat Rock, Charlotte, Atlanta, Columbia early

Glad to be home

Glad to have power

Glad to have no loss of life in the Palmetto State

As the old saying goes, “September, we remember”

Snark notwithstanding….hurricanes are existential crises for those of us who are privileged enough to live on the coast. Port towns. River cities. We’re all bonkers, but we send all our love, sympathy, prayers and donations to our friends in the Bahamas.

This site uses Akismet to reduce spam. Learn how your comment data is processed.